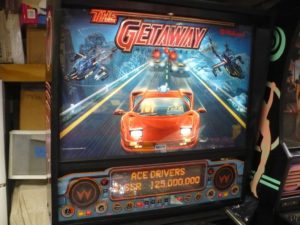 Williams The Getaway: High Speed II is the sequel to Williams 1986 High Speed pinball machine. The backglass artwork was done by Doug Watson and playfield art was done by Mark Sprenger. According to the game designer, Steve Ritchie, the car chase theme came from a real high speed chase when he was chased by police at 146 mph in his 1979 Porsche 928. 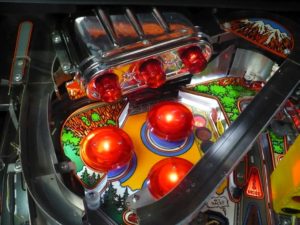 The Getaway has three flippers, three pop bumpers, and a gear shift ball launcher that doubles as the control during game play and video mode to control the RPMs. A metal supercharger loop uses three magnets to hurl the ball around the track and release it into play. The steel ramp and chrome cover reflect the red flashers and LED bumper caps. 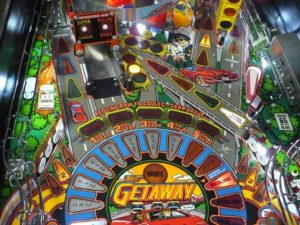 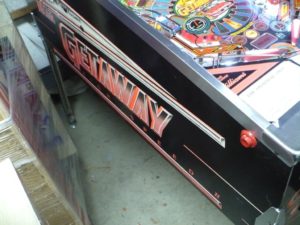 We have added a police car with flashing lights to the upper left hand corner. The lights on the police car flash in sequence with the Mars light on top of the backbox. We have also added a model Donut Heaven restaurant on the right hand side over the ball lock.

The Getaway is a fast-paced game with a good mix of long and short shots It features a three ball multi-ball is a four-player game suitable for all ages. The game uses the song “La Grange” by ZZ Top for its theme song. This game has been upgraded with LED lighting throughout and configured for free play. Please call or e-mail with any questions.

This entry was posted in 1980's - 2000's Pinball Machines and tagged Getaway. Bookmark the permalink.