The Classic Pinball from the 70’s 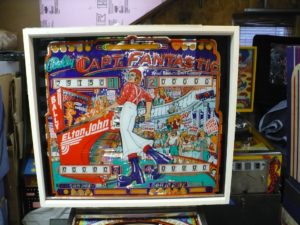 Inspired by the 1975 movie Tommy, Bally’s 1976 Captain Fantastic and the Brown Dirt Cowboy is a classic electro-mechanical pinball machine with score wheels and chimes. The backglass depicts Elton John’s Pinball Wizard character from the movie. Dave Christensen, the artist, includes dozens of detailed characters in the background cheering him on. Although the original artwork features characters that were later censored by Bally, the glass for this game has the censored artwork, often referred to as the “stars-version”. Additional silver stars were added to cover up some of the character’s actions. 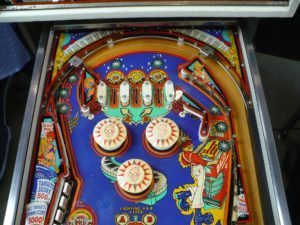 Captain Fantastic features four flippers, three pop bumpers, eight roll over buttons, one bank of five drop targets, and a ball save gate in the right out lane. Scoring the top center rollover when lit opens the gate for the player. The game uses a buzzer to indicate when a player rolls the score wheels over to 100,000 points. A light behind the backglass illuminates to show which players have exceeded one hundred thousand points.

This is the full-sized arcade version of the game. (Bally produced a home-model with fewer features that is scaled down for kids to play.) The game allows up to four players and it set to free play so that quarters are not required. The cabinet on this game has been restored to its original bright red, white, and blue color scheme with the proper speckling to break up the white background. Please call or e-mail us for more pictures or with any questions. 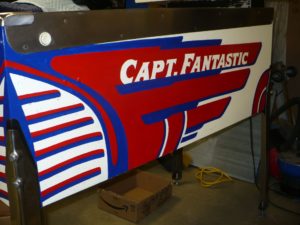