Midwest Pinball is in full gear for the holiday season. We have been updating our website and adding games for sale on our inventory pages. We have many fun-to-play pinball machines to fit all holiday budgets. See below for three examples.

Please check out our Pinball Machines for Sale page for more great games, and as always, please call (312) 925-1386 or contact us for more information. 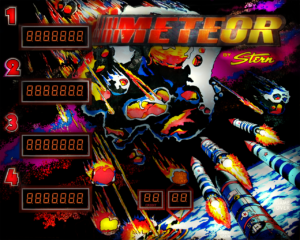 Stern’s 1979 Meteor pinball game was produced in conjunction with the movie Meteor by American International Pictures. The game came out as a promo for the movie which starred Sean Connery and Natalie Wood.

This game features three flippers, one pop bumper, two passive bumpers, two slingshots, three star rollovers, three 3-banks of drop targets, one spinning target and one standup target. Meteor also features one 6-bank of memory drop targets. These special drop targets are held in memory and restored prior to each player’s next ball. The bank then increases the bonus multiplier and activates other features.

The spinner is a variable value spinner: scoring increments increase and decline with Meteor target bank positions. Rocket bonus alignment is the key to wows and specials. The outhole scores rockets times the bonus multiple and the maximum bonus rewards player with total board visual display.

Like the movie which was Oscar-nominated in 1980 for best sound, Stern’s Meteor features a new-for-the-time audio system: the SB-300 sound board. Matching the growing tension of a gigantic meteor approaching Earth, the game’s background buildup sound leads players into the excitement.

This game was designed by Steve Kirk. Artists Leslie Kaip and Jorge Obregon drew their inspiration for the backglass and flyer from one of the movie’s advertising posters.
This 4-player game has been configured for free play.

Bally’s 1980 Silverball Mania is a fun, 4-player game with lots of specials and a carryover feature. This solid state electroinc game uses its two flippers, three pop bumpers, horseshoe lane, two rolloever spots, and a kicker to challenge players into reaching for specials.

Silverball’s Center Hoop feature contains 2 rollovers and a target. Going over the rollovers spots will light one or two letters in “Silverball Mania” depending upon the setting, increasing the bonus up to 5X. The center target completes the “N” in “Mania” and awards an extra ball when lit.

Each three times “Silverball Mania” is completed during a game, or when the kicker special is activated, one letter of “Silverball” lights on the lower left backglass. This Carryover feature is operator adjustable. The letter will remain lit from game to game, enticing players to try for its completion and an operator option award!
Silverball Mania grants players an extra chance to play with its Kicker feature. Beneath the flipper is a kicker that sends the ball back into play. The top center lane or the center hoop raise the kicker to activate the feature. A special is awarded if Kicker Special light is lit.

Each Silverball Mania letter, when lit, is worth 1,000 points. Up to 44,000 bonus points, times the multiplier, may be collected by these letters. Completing the sequence the first time lights the Wizard Bonus, worth 15,000 points. The Supreme Wizard Bonus, worth 30,000 points, lights with the second, and the third completion awards a special and lights a letter in the backglass carryover feature.

Designed by Jim Patla and boasting the unique-for-its-time artwork of Kevin O’Connor, Silverball Mania has a great Feature Programmed Sound System and has been configured for free play. 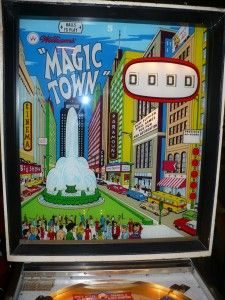 Welcome to Chicago, the Magic Town

Williams’ Magic Town is a classic 1960’s pinball machine. It features four pop bumpers and five stand-up targets. This is an add-a-ball game, which means that the player has opportunities to earn extra balls during play.

As with many games from the early to mid 1960’s it features the nice, clean artwork of George Moletin. The backglass depicts a huge fountain in a city’s main square surrounded by skyscrapers. Pedestrians crowd the park and cars crowd the surrounding streets.

Magic Town is an add-a-ball game. (Magic City is the replay version of this game.) Each game starts with five balls, and the player earns replays by advancing the bonus through the Special.

Magic Town is a one-player game suitable for all ages and has been configured for free play.