Prove Yourself and Join the Circus!

Gameplay is smooth, fast and fun. Bally utilized the circus theme to its utmost with colorful graphics, lights, music, playfield design, gameplay and backbox animation. There’s even a Ringmaster head that rises from the playfield and talks to the players. Players aim to shoot balls down the Ringmaster’s throat as he taunts them with jokes. 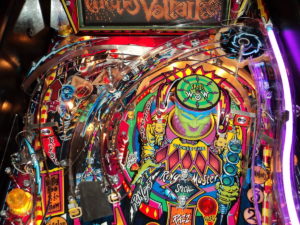 Wizard mode is unlocked by performing different circus “marvels” in order to join the circus. Players pump up the high voltage BOOM balloon then blast it to earn points and an extra ball, and shoot the ball over the volts spot on playfield for an electrifying experience. Also, there are six different (and stackable!) multiball modes, inclduing: neon, strike-an-arc, highwire, juggler, and party. 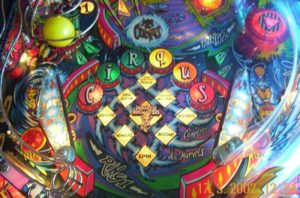 Cirqus Voltaire is a colorful, cleverly fun game with great gameplay, music, callouts and specials. Fun facts: This is the first SS game to have a disappearing pop bumper and the only Williams pinball machine with its DMD mounted on the back of the playfield instead of in the backbox.

Cirqus Voltaire is a 4-player game and has been configured for free play. Call or email for more information.